MY-PLATE CHARITY IN SUPPORT OF EDUCATION 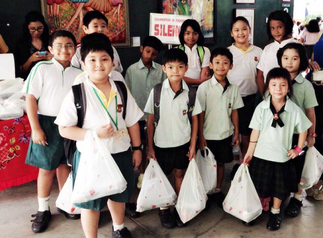 Modern-Pak Singapore celebrates its 35th Anniversary by coming together with its staff for our inaugural charity drive in 2013, a 4 month long My-Plate Charity pioneered by our Managing Director.

My-Plate Charity is Modern-Pak's way of giving back to society and celebrating the company’s long term success and achievements in Singapore. This project is a sponsorship and donation of our newly designed and locally manufactured 2-tier Lunchboxes and catered food packed in them to benefit namely needy students of Ministry Of Education's Financial Assistance. The food in Lunchboxes for the students were presented and distributed during their Friday's fornightly activities graced by Mr Tan, Director of Modern-Pak. It was attended by over 60 persons, comprising students, Principal, Vice Principal and teachers of McPherson Primary, and Modern-Pak's staff.